You should not underestimate the importance of moulding samples in your frame shop. It is on this basis that a client forms his first impression of you.

"I would like to see that moulding sample" says the client whilst pointing to one on the wall. The framer firstly has to follow an imaginary line from the customer's finger to the corner sample on the wall.
The corner sample display panel is behind the framer, on the other side of the counter from the customer, and it is difficult for the customer to clearly indicate to the framer which sample it is that interests him. "No, just a little bit lower" states the customer. "No, no, one column to your right and then about 3 samples up".
After a few attempts the framer has the sample in his hands and can finally place it on the corner of the picture to be framed. "From this distance I thought it was a bit different. Can I have a look at that other one.......". The hunt for the right moulding has just commenced. 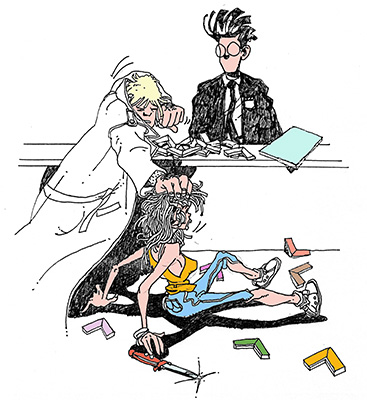 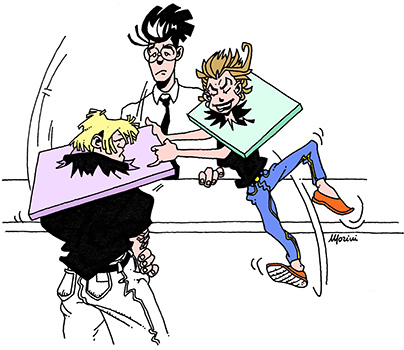 This is a typical scene that repeats itself various times a day in many frame shops. The moulding display panel is usually placed behind the counter, out of physical and visual reach of the customer.
If you are one of these framers it might be preferable to move the display to a position closer to the customer. This would put an end to the searching and placing of the samples but would also bring about other advantages. Customers could pick and choose the mouldings on their own and consequently feel more at ease.
The framer could encourage a "self service" system which would be handy particularly in busy periods. When husband and wife disagree over the moulding the framer could simple state "I'll leave you on your own so that you can decide between yourselves". The framer gets himself out of an embarrassing situation in the event that he was to be asked his opinion. 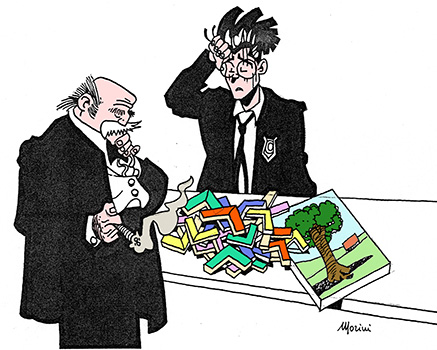 If customers have the possibility of looking at samples on their own they often choose mouldings that, according to your tastes, you would never have dared suggested. Often these mouldings have been stocked in your back room for months and you are eager to get rid of them.
Letting customers handle mouldings themselves can present itself with some disadvantages. There are those enthusiastic customers that pick every moulding from your display and leave your counter piled up with them. There are those customers, however conscious, that put them back one by one on the display .....but unfortunately in the wrong places.
There are those customers that when removing one sample, pull the rest of the display down with them. Another disadvantage is that we can no longer direct the customer to the mouldings that would be most suitable for the picture. It is also difficult to direct them to those mouldings that we would like to dispose of.

Apart from a wall display system there are other systems. For example one or two columns of samples can be placed in appropriate containers on the counter. 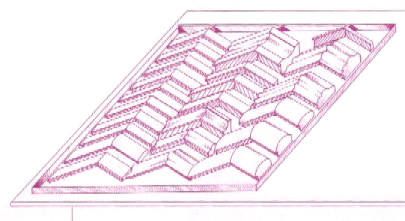 The advantage here is that they are at arms' reach both for the customer and the framer. The samples should be placed reasonably close to each other minimising space in between.
This is a system that goes well with thin mouldings as thicker ones would occupy too much space. Another solution would be to keep the larger mouldings on a wall display and the thinner ones on the counter. Another solution could be to keep various containers on top of each other like drawers. Each drawer could have a homogenous type of moulding. Only those drawers containing mouldings suitable for that picture would be showed to customers.
Another system would be to keep the mouldings in proper drawers. Each drawer would contain the same type of mouldings. These drawers could be kept near the counter. Unfortunately this system has the disadvantage of not having them on display..
So far we have only talked about corner samples. There are many framers however that use small straight pieces instead of corners. It is a system that has the advantage of taking up less space but it is not liked by customers as they cannot imagine the finished framed picture from just looking at a small piece of moulding. We do not advise this method.

Let's examine the corner moulding display panel in more detail. It could be made from chipboard covered with a cloth or fabric. Mountboard cloth could be used for example. A neutral dark colour would be preferable so that dust isn't noticed as much and the samples are greatly highlighted.

The problem of the panels now anyway was brilliantly solved by Rinaldin with its innovative display system, which is described in the "Moulding samples: it is now easier" and in the video: "The System to Display Frame Corner Samples" , which you can see by clicking here

The corner sample itself

Let's look at the corner sample. What features should it have? It should first of all be well finished. The corner joints should be perfect and the ends not chipped off. The top end of the corner in particular should be perfect. The customer, especially if they are entering our shop for the first time; judge us on the quality of our mouldings: if the mouldings are badly made they believe that their frame will end up the same.
Same framers believe that by purposely showing badly finished samples they set a low standard. they believe that customers will be pleasantly surprised when they receive their finished frames. We disagree with this technique as in many cases you will not get the job in the first place. The frame should be of the same quality as the sample.
You should frequently check the samples and replace those that are damaged. Another problem with samples is the genuine diversity between samples and moulding especially with colours and finish.
One of client's biggest complaints is the diversity between sample, that was originally shown to them, and the finished frame.
This difference can also be caused by your change in supplier. Even mouldings from the same supplier can have slight differences from one production batch to the next. It is a small problem that should be given a certain importance. At the two ends, the samples can be cut in three ways. Horizontally, vertically, and obliquely.

The most advisable is a vertical cut so that the samples look well organised and occupy less space. The sample should not be too small otherwise the customer has difficulty in forming a mental picture of what their frame is going to end up looking like, and it cannot be too big due to space limitations. Hence a middle measurement needs to be found. The optimal measurement should be about 15 cm (6") for each side of the corner sample.
It is important that all samples are the same size so that they look organised and are easy to choose from. It would also be handy if the moulding producers finally got together and standardised samples however that is another matter.

On the back of the samples

There should be some vital information written on the back of the sample.


Other information could also be added depending on each framers organisation. For example:

Have you ever counted how many samples you have in your shop? If you have more than 200, then you are above the European average. You will however probably have less than the average American framer. They display about 350 models.
This is due to the high number of mouldings available to the framer through the "Chop Service" system (a well advanced system that allows the framer to quickly obtain cut mouldings and above all avoids him keeping stock). Offering a wide choice is important for the customer. A customer returns more willingly to a store that is well stocked and well organised.